You have to add these cinnamon sugar French toast sticks with blueberry maple sauce to your next brunch menu. Dusted with cinnamon sugar and topped with the most delicious blueberry maple sauce, your entire family will love this breakfast recipe. It’s easy to make and absolutely delicious. The only problem is that you’ll have a hard time not finishing off the entire pan.

For this French toast stick recipe, I used stale Texas toast. The Texas toast bread works best because it is thick and firm. Let the bread sit out overnight on a baking tray so it can get as firm as possible. Once it fully dries out, it holds onto the egg mixture perfectly. In my opinion, there is nothing worse that soggy French toast. So, you will want to use a sturdy bread like Texas toast for this recipe.

One slice of Texas toast yields four French toast sticks. For this recipe, I used 7 slices of Texas toast, which made 28 French toast sticks. Feel free to modify the recipe to fit your family’s needs. Another important tip is to dip the stale bread sticks in the egg mixture right before you put them in the pan. Otherwise, if you let them soak in the mixture, they will absorb too much liquid and get soggy. So, dip them and add them to the pan once they are coated.

You will want to make sure all four sides get nice and toasty. Turn the French toast sticks frequently until each side is golden brown. It is also important to cook these in a pan with some butter. The butter adds flavor and creates a beautiful golden-brown crisp on the outside.

Finally, you will want to dust the golden-brown French toast sticks with the cinnamon sugar mixture. A light dusting on one side is plenty. You do not want to add too much cinnamon sugar, or the sticks will be too sweet.

The blueberry maple sauce is very easy to make. Toss the three, simple ingredients into a pan and simmer everything over medium-low heat. You do not want the heat to be too high or it will caramelize the maple syrup. Once the blueberries blister and the sauce begins to thicken, remove it from the heat. Serve this on the side for dipping or on the top of your cinnamon sugar French toast sticks. Like the picture above.

This recipe makes about 6 servings. Each person would get 5-6 sticks with sauce. Please see below for the nutritional information. It does not account for maple syrup or powdered sugar.

Best if eaten the same day. However, you can refrigerate these stick in an airtight container for 3-4 days. The blueberry sauce will need to be store separately to prevent the stick from getting soggy. Reheat in the microwave until heated through. Looking for more delicious breakfast recipes? Try my old fashioned banana bread or my cinnamon bun waffles. 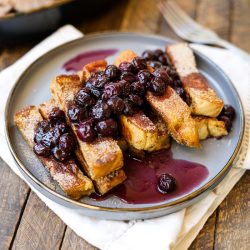 Yield: 6 servings
Prep Time: 30 mins
Cook Time: 30 mins
Total Time: 1 hr
You have to add these cinnamon sugar French toast sticks with blueberry maple sauce to your next brunch menu. Dusted with cinnamon sugar and topped with the most delicious blueberry maple sauce, your entire family will love this breakfast recipe.
Print Recipe Pin Recipe
No ratings yet
Leave a Review »