Breakfast just got a lot tastier with these cinnamon bun waffles. If a cinnamon bun and a waffle had a baby, this cinnamon bun waffle recipe would be it. These homemade waffles are perfectly fluffy in the center, with the tiniest touch or crisp on the outside. Combined with the vanilla and cinnamon, and these breakfast waffles are dangerously good. They are so good that you might need to make two batches because you ate the first one by mistake.

About this waffle recipe

Honestly, I always considered myself a pancake person until now. These cinnamon bun waffles are exactly what you need during your next brunch. What’s great, is that they only take 30 minutes to make. I know homemade waffles sound complex, but trust me they’re so easy and worth it. Your friends and family will be blown away by how delicious these waffles are.

Serve these waffles with a homemade cinnamon vanilla glaze. However, maple syrup, butter, berries or whipped cream would work well too. This waffle recipe makes five waffles which is perfect for two to three hungry people.

When prepping the batter simply combine all of the ingredients except the egg white. You’ll want to beat the egg white in a separate bowl until it is foamy and fluffy. Then, you’ll gently fold the beaten egg white into the rest of the batter. Be sure to spray your waffle iron with non-stick cooking spray before adding the batter. Cook for 2-2.5 minutes before removing the waffle from the iron. You can also spray your ladle with cooking spray to help prevent the batter from sticking to the ladle.

Store any leftover waffles covered in the refrigerator for one to two days. Reheat in the microwave until heated through. You can also store any leftover waffles in the freezer. Make sure the waffles are fully cooled, then add them to a freezer safe, Ziplock bag. Place a sheet of parchment paper between each waffle to prevent them from sticking together. Thaw in the refrigerator and enjoy. Looking for more brunch recipe ideas? Try my one bowl banana oat pancakes. They’re easy to make and delicious. 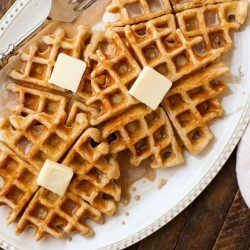 Yield: 5 servings
Prep Time: 10 mins
Cook Time: 20 mins
Total Time: 30 mins
Breakfast just got a lot tastier with these cinnamon bun waffles. If a cinnamon bun and a waffle had a baby, this cinnamon bun waffle recipe would be it.
Print Recipe Pin Recipe
5 from 4 votes
Leave a Review »