This baked eggplant parmesan recipe is made from a few simple delicious ingredients. What’s great is that this recipe is large enough to share and perfect any night of the week. This dish does take some time to make but it’s totally worth it.

How to prepare eggplant

For this baked eggplant parmesan recipe you will start by removing the stems from your eggplant and peeling it. Next, carefully cut the eggplant in half, lengthwise. Place the eggplant down flat on your surface and slice it into long strips. Cut those strips into cubes. You’ll want them to be about the size of a half dollar. Generously dust the eggplant with the salt and olive oil. Allow it to rest for one hour so it can sweat out all of its bitterness. Next, you’ll squeeze the eggplant using your hands to remove any excess moisture. Place the squeezed eggplant on a prepared baking tray and roast it for about 30 minutes.

Next, you’ll add the roasted eggplant to the saucepan along with some of the three cheese blend. Stir well. Add the eggplant mixture to your prepared cast iron skillet. Top with the remaining three cheese blend. Bake covered for 30-35 minutes or until the eggplant is fork tender. Broil for an additional 1-2 minutes so that the cheese on top gets extra crispy and bubbly.

Store covered in the refrigerator for up to three to four days. Reheat in the microwave until heated through. Looking for more tasty recipes? Try my fried eggplant parmesan or my ground chicken and veggie lasagna. 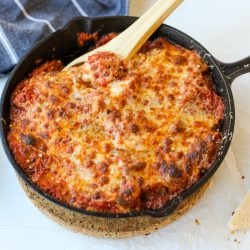 Yield: 4 servings
Prep Time: 1 hr
Cook Time: 1 hr
Total Time: 2 hrs
This baked eggplant parmesan recipe is easy to make and loaded with flavor. Perfect as an appetizer or as your main meal.
Print Recipe Pin Recipe
No ratings yet
Leave a Review »