For this vegan reuben sandwich recipe, I started by swapping any animal products for vegan products. First, I swapped local oyster mushrooms instead of traditional corned beef. Next, I swapped vegan butter for the regular. If you’re looking for a vegan butter brand, I like using Earth Balance. Next, I made a vegan Russian dressing that is packed with flavor. It’s tangy, light and creamy, just the way it should be. 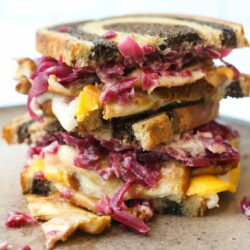