Pittsburgh is known for a variety of things, but the famous Isaly’s chipped chopped ham barbecue sandwich is really something special. Growing up, we would make frequent trips to Isaly’s.

As background, Isaly’s was a small mom and pop store that was famous for their deli meats and homemade ice cream. They had locations throughout Western Pennsylvania and Ohio, but we would always visit their West View store in PA.

When you walked in you felt like you were going back in time. The wall was lined with glass cases which housed their famous ham chipped chopped to perfection, as well as their dairy products. Their most famous ice cream flavor was white chocolate cherry. Boy, was it good.

However, what made the ham so special is that it was shaved incredibly small. So thin you could see through it! Making it perfect for ham barbecue sandwiches. The meat would almost melt into their famous Isaly’s BBQ sauce. Once heated through, you would simply load the ham barbecue onto a buttery toasted potato roll. It was so simple but so good.

Which is why we’ve recreated the recipe using the Isaly chipped chopped ham and their famous BBQ sauce. Once you try this recipe, you will never want a ham BBQ any other way.

Is Chipped Ham Only a Pittsburgh Thing?

No, a chipped ham sandwich isn’t only a Pittsburgh thing, though Isaly’s made the dish iconic to Pittsburgh.

You can get chipped chopped ham at diners across Pennsylvania, Ohio, and West Virginia – as well as at the original Isaly’s location in Pittsburgh. The dish is expected to continue spreading across the region as diners and home cooks get wind of the delicious waste.

While the classic ham sandwiches chipped lunch is served to you as-intended in many locations, buying some and taking it home also allows you to put your own creative flair on the dish like cheese chopped ham, or salt chopped ham. One thing – you’ve got to try the original chipped ham sandwiches, too.

Can You Get Chipped Ham Outside of Pennsylvania?

Yes, you can get bbq chipped ham outside of Pennsylvania! While it might be an iconic Pittsburgh dish, Isaly’s has expanded their operations to allow kitchens across the country to try their chipped ham without sacrificing quality or freshness. You can purchase their chipped chopped ham online, and though it can be a difficult wait to get the ham shipped, it’s well worth it!

Why Is It Called Chipped Ham?

As mentioned above, one of the key differences between chipped ham and other places is that the ham has been sliced razor thin. It provides an incredible mouthfeel when you pile it onto a potato roll, and all the ham goodness just melts in your mouth.

Isaly’s does this one type of ham cut so well that it has expanded past its Pittsburgh roots and is now beginning to travel across the United States one kitchen at a time. While it’s hard to imagine the difference between this and regular ol’ shaved ham, you’ll never go back once you try it.

What Type of Ham is Chipped Ham?

Ham is typically made from any kind of processed ham chunk you can find at the deli counter. Typically its made from various ham chunks from the deli that are then shaped into a loaf.  There’s no one specific type of ham that is advertised, but Isaly’s never falters in quality or taste.

Is Ham Better for You Than Beef?

Yes, ham is considered better for you than beef or other meats because of the type of fat it contains. Ham is considerably lower in saturated fats, which is commonly known as the artery-clogging bad fat. Instead, it has a delicious good-for-you fat known as monounsaturated fats. Your body needs this type of fat and helps you reduce bad cholesterol and maintain the health of your body’s cells, making ham one of the best powerhouses for fatty meats. Other sources of monounsaturated fat include seeds, nuts, and avocados.

BBQ sauce – Be sure to grab one jar (16-ounces) of Isaly’s famous BBQ sauce.

Butter the potato rolls and place them on a non-stick skillet over medium heat. Be sure to place the buttered side down.

Once golden brown and lightly toasted remove them from the pan. Set aside.

Grab a small pot and combine the chip chop ham and one, 16-ounce jar of Isaly’s BBQ sauce.

Gently stir until well combined and heated through.

Add the hot ham BBQ to the rolls and enjoy immediately.

Store any leftover ham BBQ in an airtight container for three to four days. Reheat in the microwave until heated through. If you prefer a roll that hasn’t been heated up, you can take the ham out of the fridge ahead of time and letting it come to room temperature slowly. While you can store this recipe in the fridge, I believe it’s best enjoyed immediately after adding the ham BBQ to the roll, but you’ll learn what you like most on these sandwiches. You can’t beat fresh, especially if you’re buying your chipped ham directly from Isaly’s to make the perfect sandwich. 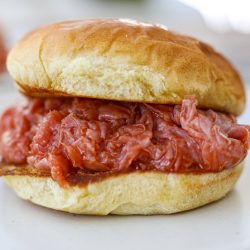